I set out to this year’s Pride Parade with what I thought was a simple goal – to make a better image than the one I took in 2017 of the man drinking in the window. It’s safe to say I failed this task miserably, but not for lack of trying! That image is probably one of the best I’ve taken, and is not as easy to exceed as simple effort.

Despite this I’m still happy with a few of the images, and definitely feel like I’m ready to really focus on a specific type of shot when I shoot this event again, hopefully in 2020. This time last year I was shooting on expired film, and just starting to get to grips with what film could offer my images. The results from this year are very different to any previous efforts, and I’m happy to see the progress in my style. 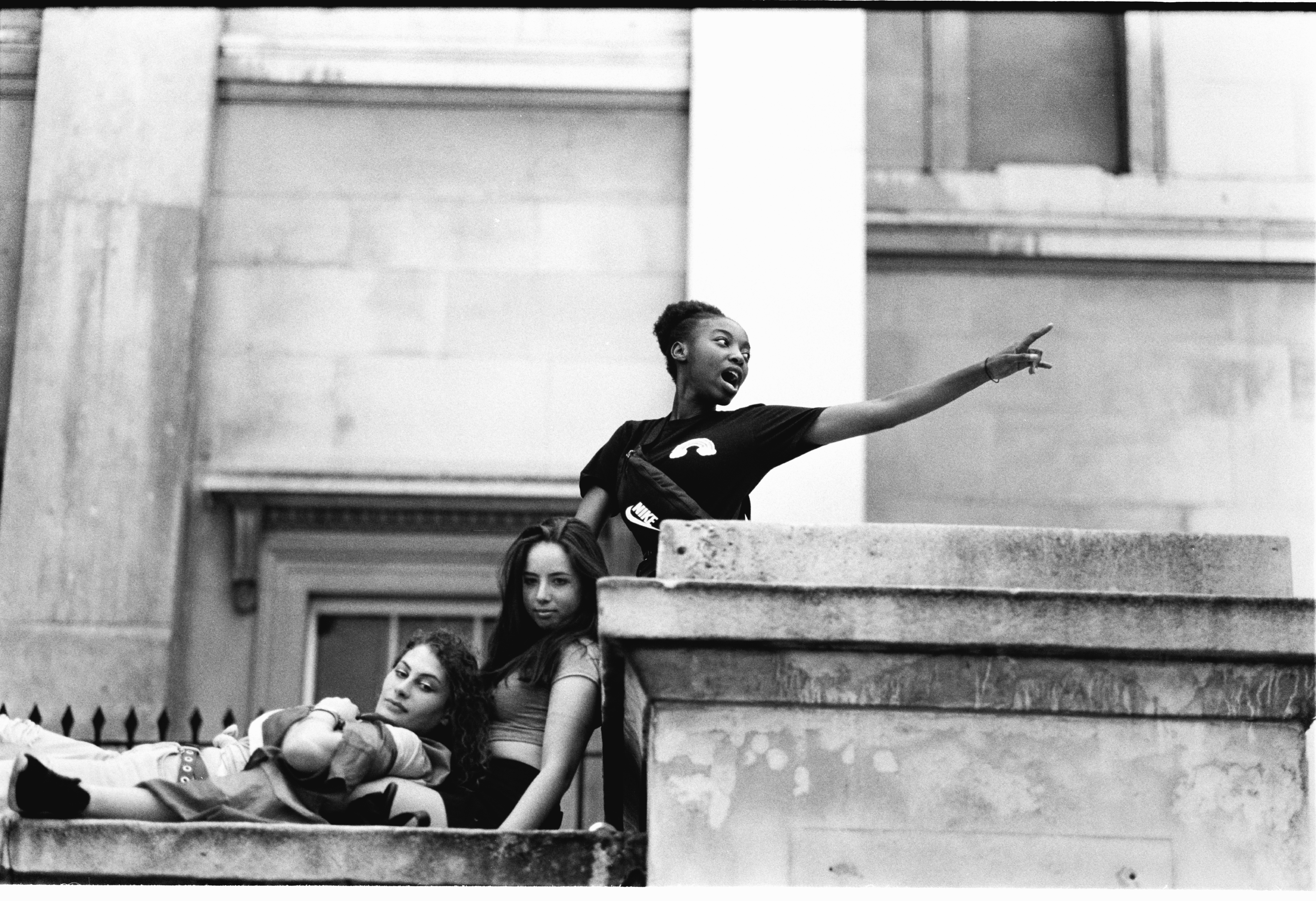 It was really interesting shooting in such a large group, although as the day went on we ended up going in separate directions. Over the course of the day I shot with David, Sagar, Zack, Andy, Bas, Jovis, and Helena. Sometimes when shooting with other photographers there can be an element of competition, or concern about treading on each others toes – but this set of people was really great. Excellent company, support, and cooperation throughout the day, and a very positive experience. 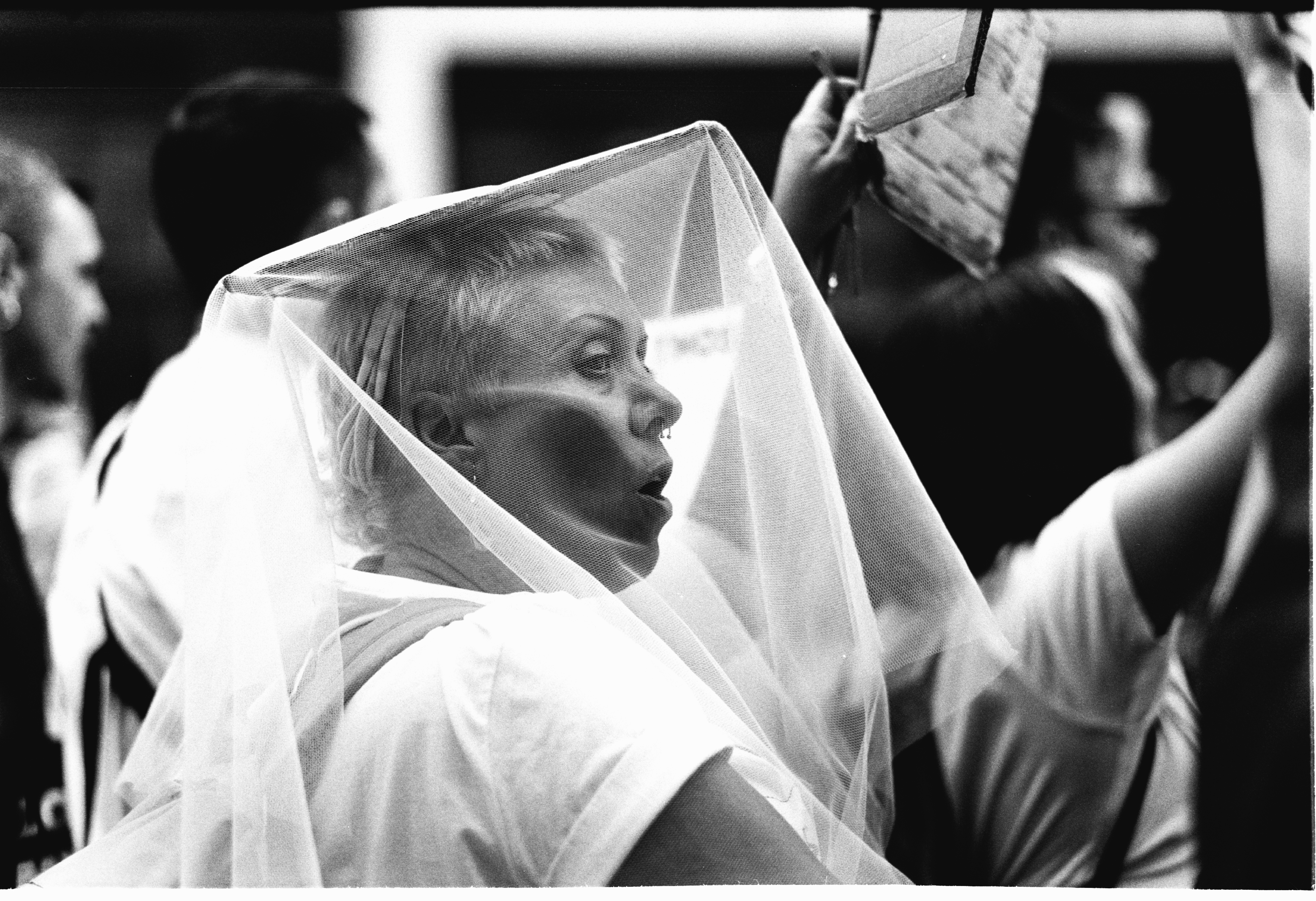 Towards the middle of the day I ended up at a part of Pride I’d never experienced before, together with Bas and Andy. It turns out that a genuine protest occurs as part of the procession, speaking out for different social causes including those countries where an event like Pride is not yet possible. 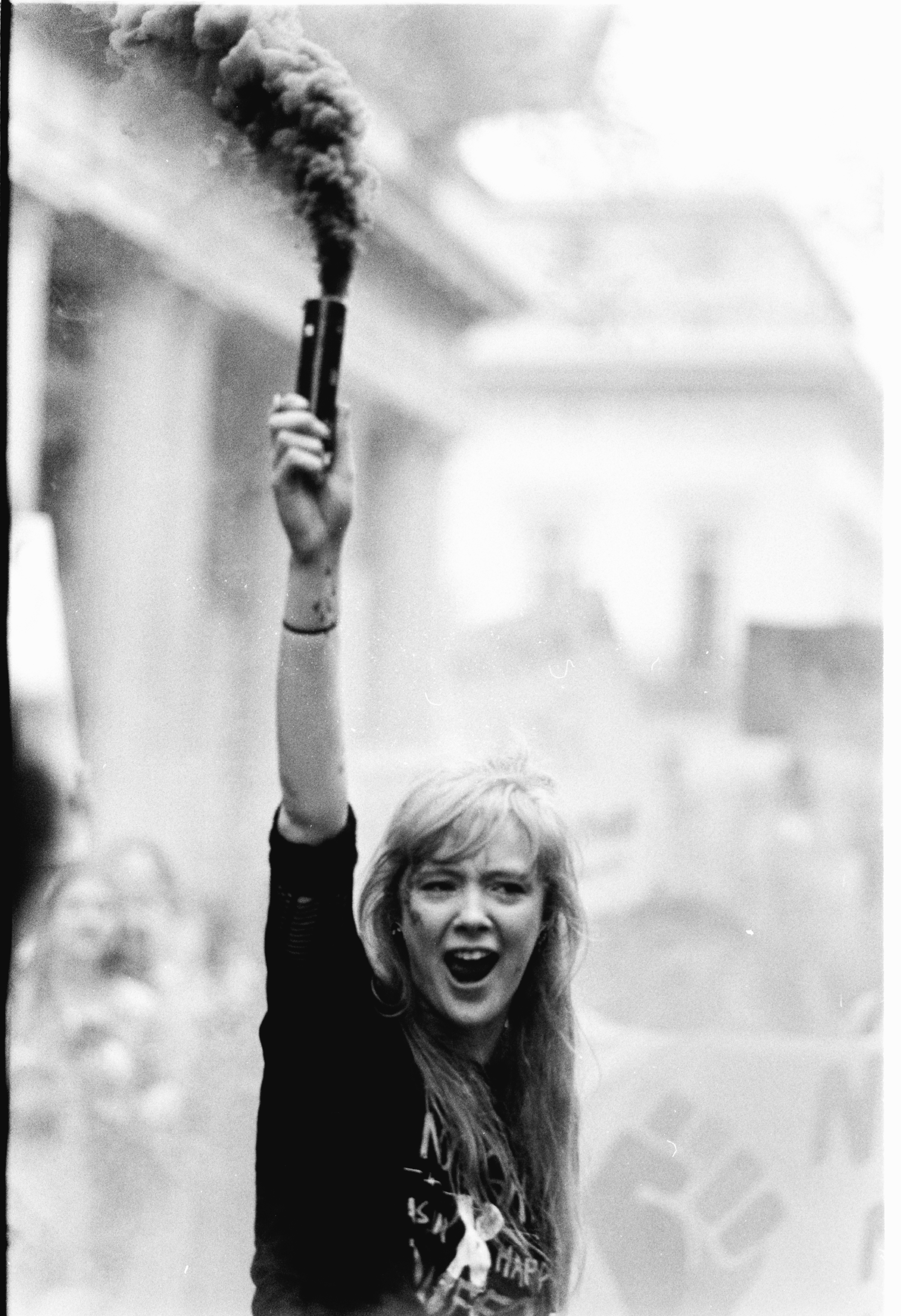 Bas, Andy, and I were the only photographers there (aside from two others) so our work from this protest is quite unique. Next year I’ll hopefully spend longer with the protest segment so that I can produce more images like this – it’s a shame other members of the media feel this is a face of Pride not worth documenting, but I found some of the most energetic people in that crowd, which was a pleasure to photograph.

I wasted quite a few frames on scenes of people climbing traffic lights. I find people climbing things to be very photogenic, so it was difficult not to shoot more of it than I did. Unfortunately I’m not really pleased with any of the compositions, but it’s definitely something I’ll be focusing on when I shoot it next! 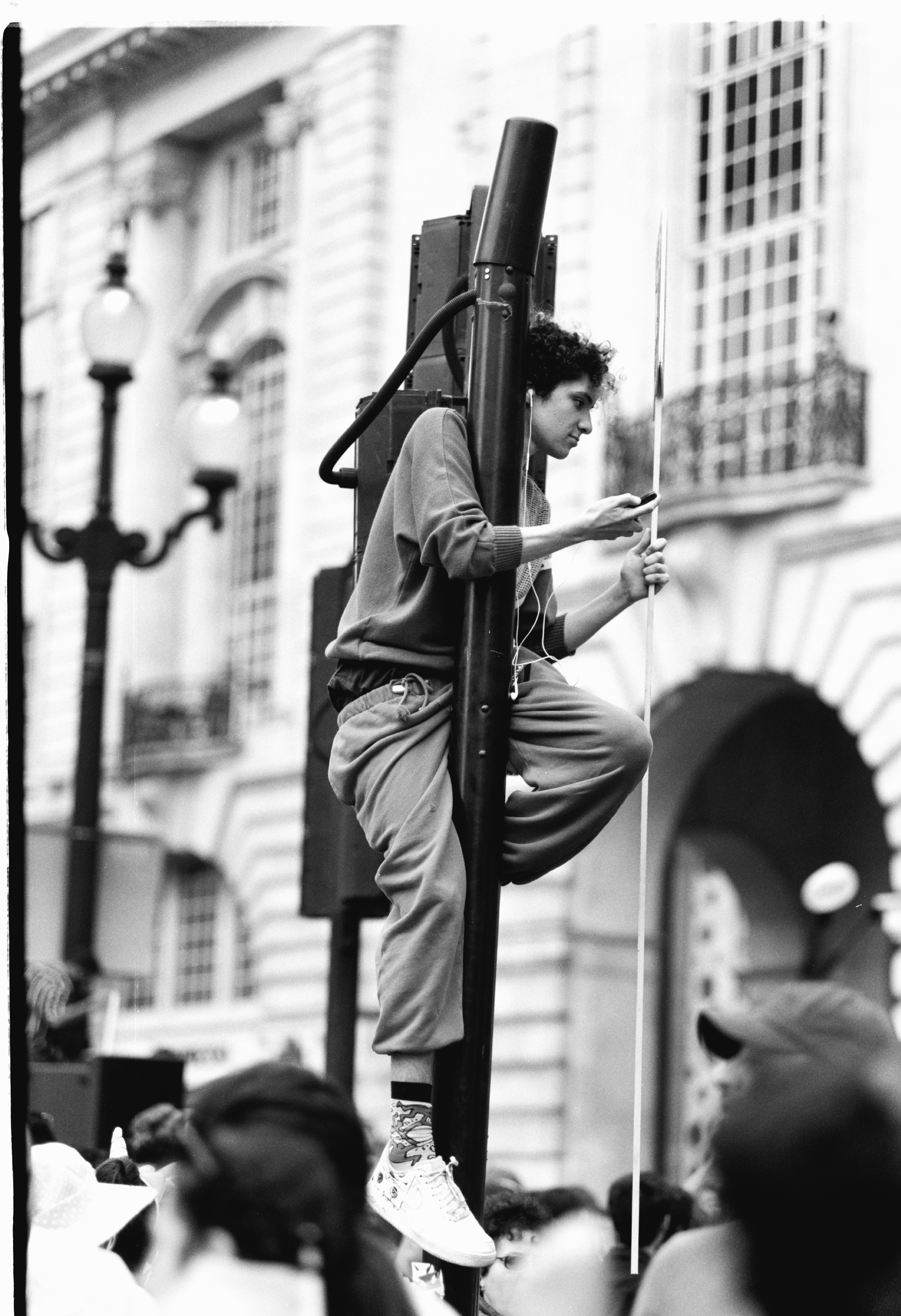 I shot the majority of these images on a roll of Cinestill BwXX, which is a classic motion picture stock originally released in 1959 as “Eastman Double-X (5222).” This was the film used for Memento, Raging Bull, Psycho, and the opening to Casino Royale.

I was really happy with the results, as I had been a little nervous about shooting such a colourful event in black and white, but the aesthetic made for some wonderful images. I was also shooting with my XA and Fujifilm Venus 800 – one of the last rolls I’ll ever shoot of this as it’s being unfortunately discontinued. 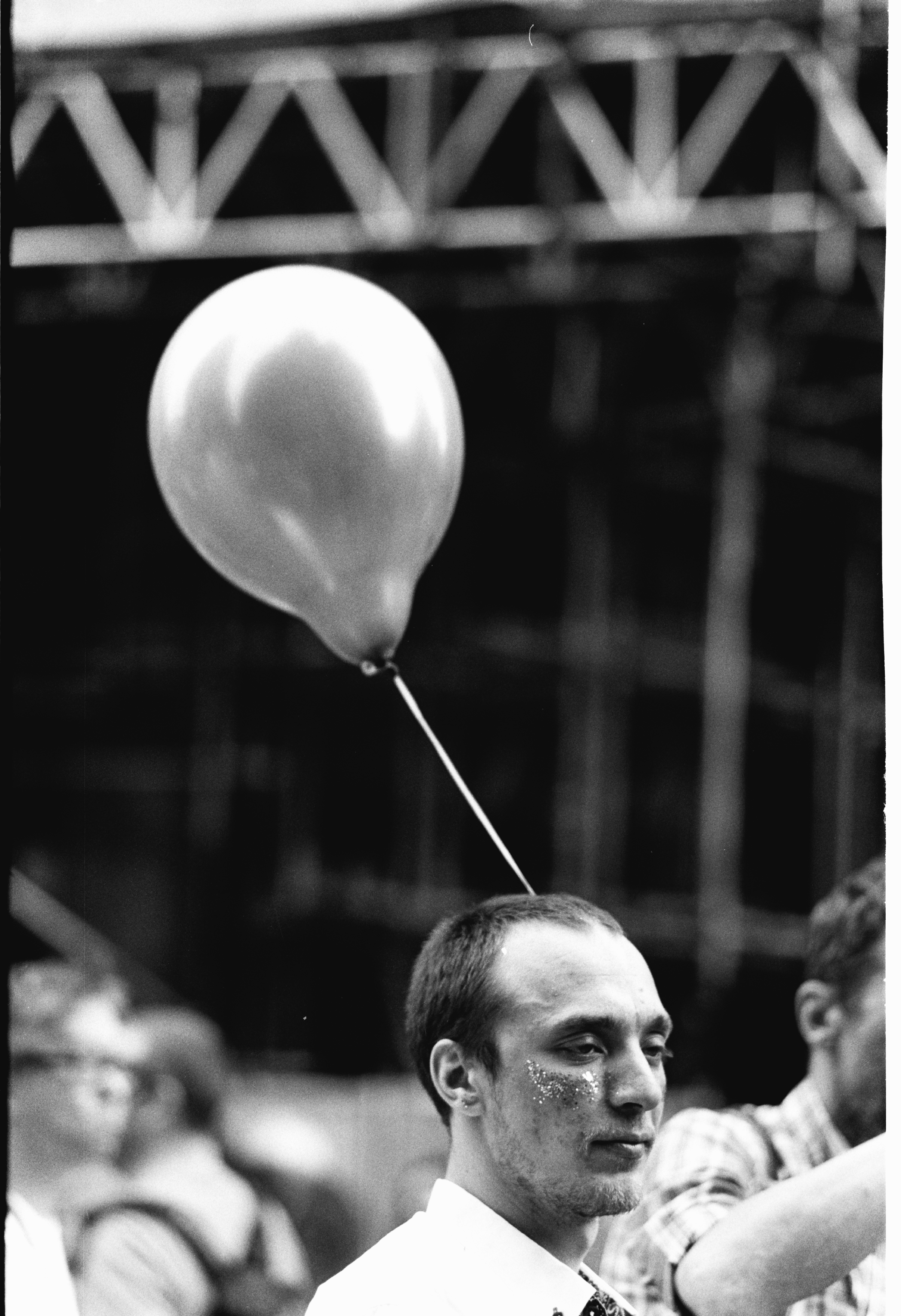 EDIT: some time after pride I was sent a link to a video from this day. I appear in it at around the 28 second mark, take a photograph, then swiftly exit frame left. It’s always neat seeing myself working from someone else’s perspective!

I am selling a small collection of photographs made in America, from 2019 to Winter 2021, in the form of an A5, 36 side, zine-style digest.
Foggy day in Whitstable.
Paris.