The Peter Pan Cup is a yearly 100m race, a swim across the icy-cold Serpentine Lido in Hyde Park. Swimmers have met in the park every Christmas morning since 1864, and the titular “Peter Pan Cup” was first donated in 1904 by author J.M. Barrie.  Participants must acclimatise themselves to the cold across the year, and these weekend swim sessions have caught the attention of a few London based street photographers who have been documenting those days. I wanted to photograph the event itself, so planned my Christmas Day around attending this early morning event.

Attending meant waking up quite early, and figuring out my way to Hyde Park, as buses and trains weren’t running. I opted to Uber there and planned on bicycling back, and managed to arrive at 08:05. This gave me a 55 minute pre-amble around the area, photographing as people began to get ready for the race. 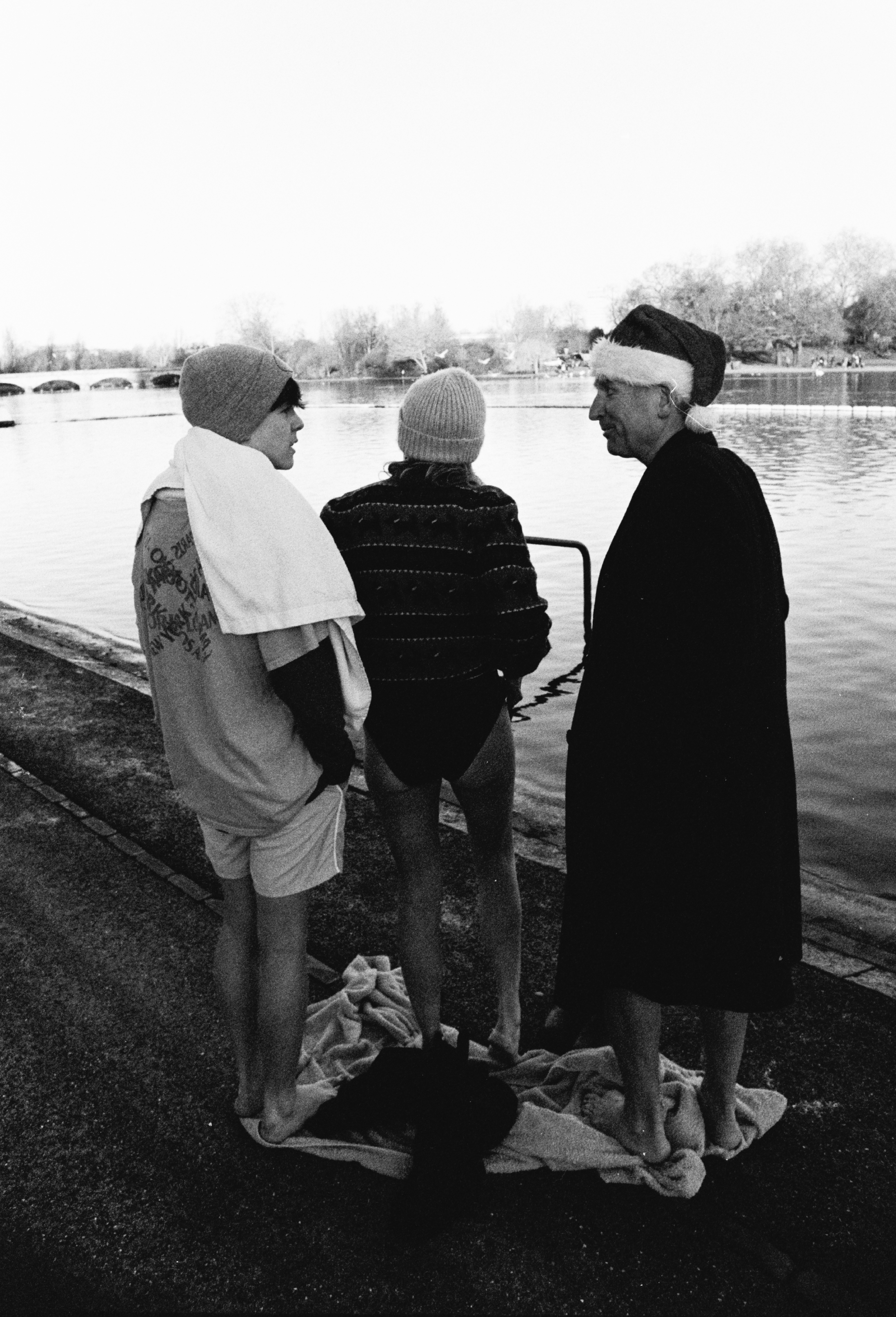 There were two shots I was especially interested in were the swimmers lining up along the small pier for the starting line, and the dives just as the race begins. Unfortunately for me there were far more spectators than I’d expected which meant I needed to make a compromise.

I positioned myself initially about 30 meters away from the starting line which meant I would be able to get the line-up shot (header image), but the race started very shortly after everyone was ready – this meant I had to run and then force my way to the front of the crowd by which time everyone had already entered the water. This is something I can now only remedy next year, by attending again and getting the spot near the swimmers to capture the dives. 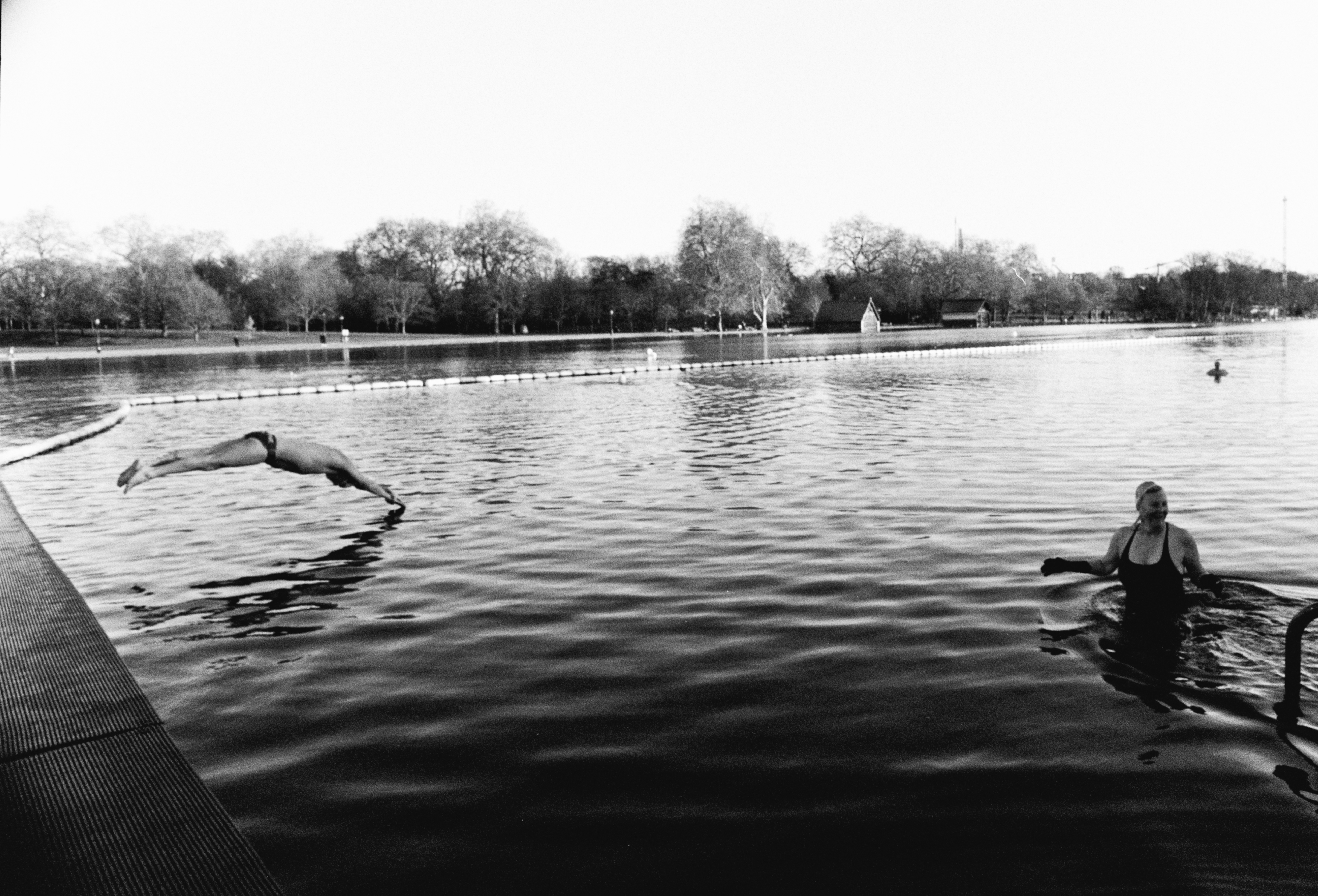 After the race began I took a few shots of the people in the water, as well as some images of people watching from the bank. The actual race was over within about ten minutes, after which a few members of the swimming club went for a short swim on their own terms. I was able to photograph these easily, and went out along the pier myself in order to capture a more unique angle. 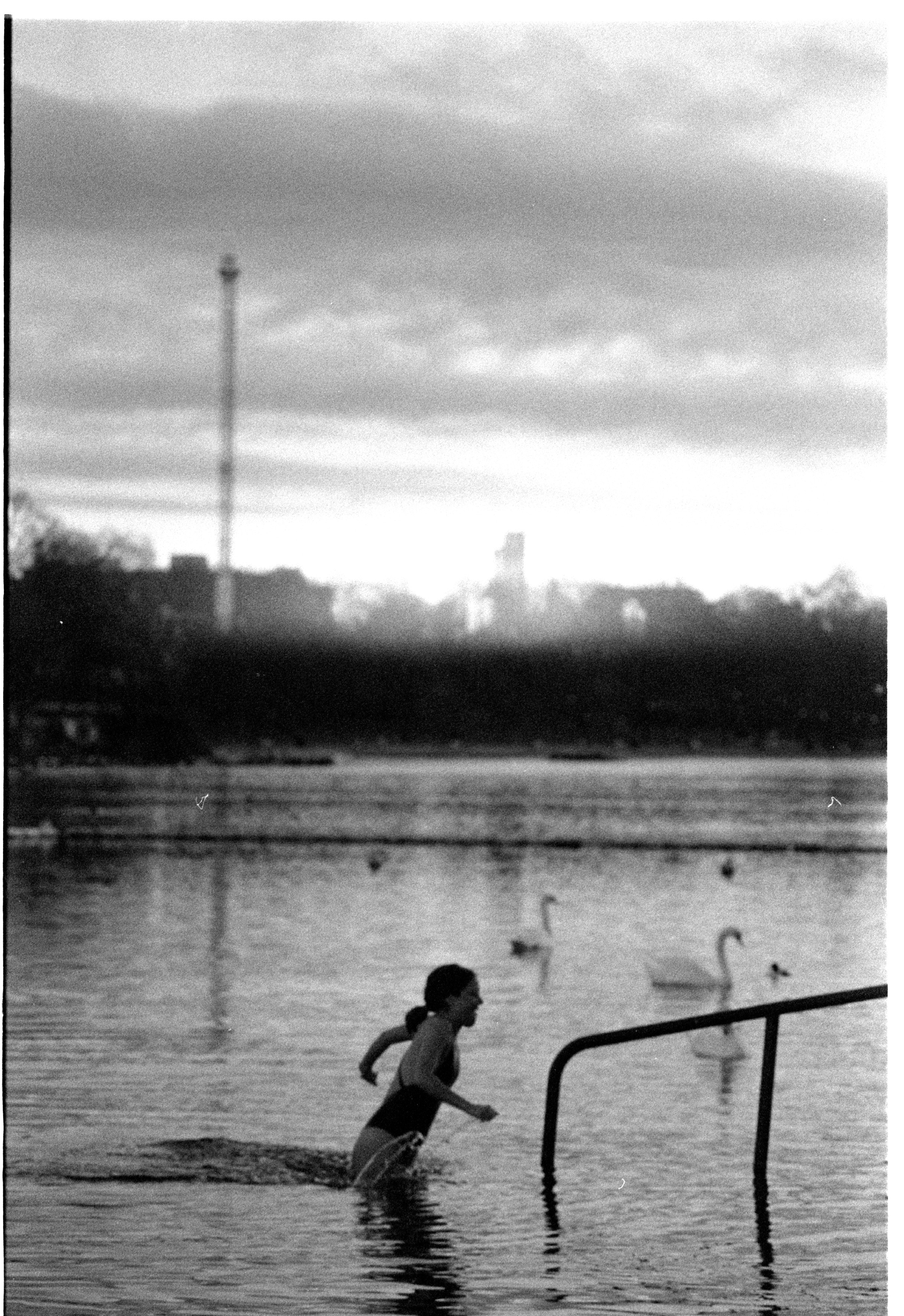 After the race I walked through Hyde Park towards Marble Arch. The light was fantastic, a golden hour that lasted almost all day. There were some nice scenes in the park as a result, and there were more subjects than I’d expected – lots of tourists, people who weren’t celebrating Christmas. 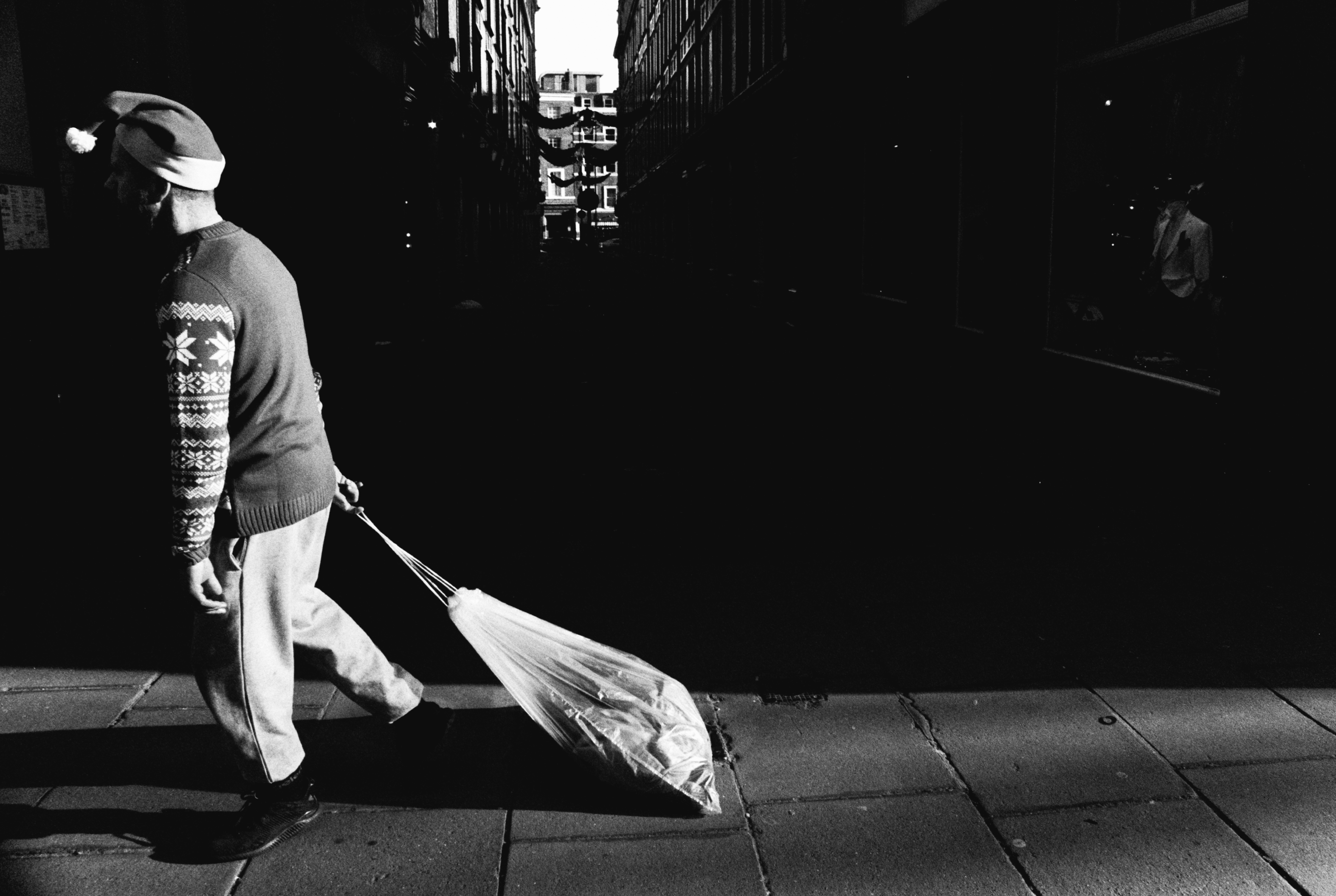 From Marble Arch I walked down Regents Street and into Chinatown. Chinatown was quiet, so I moved on through into Soho, which was also fairly deserted. Trafalgar Square was my next stop, and this was much, much busier so I stuck around for a while. The light was fantastic, and I had some great scenes to work with from the long shadows. 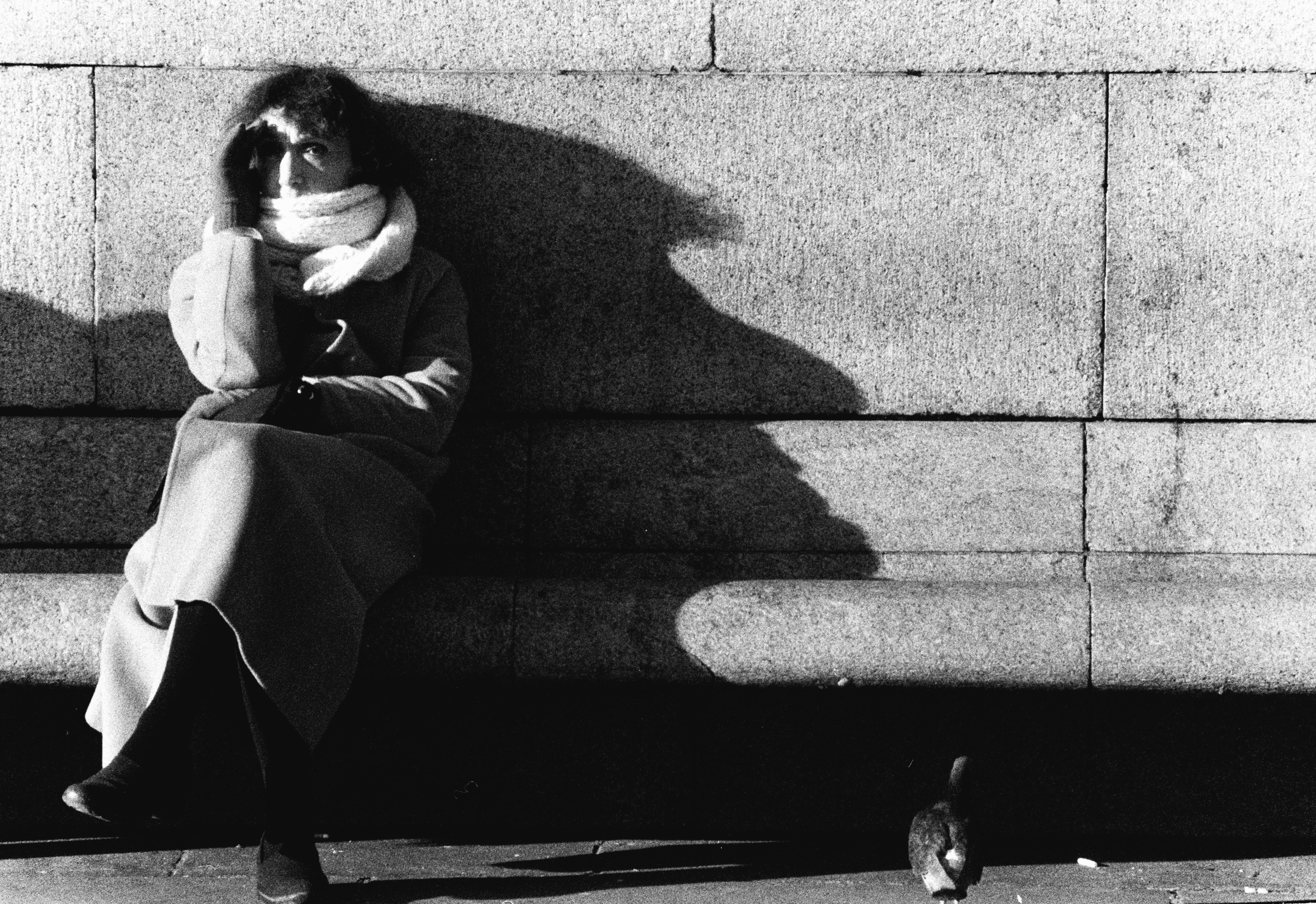 This image is probably the best to come out of the day, and was made during my time in Trafalgar Square.

I finished my roll of 3200 in my FM2 and loaded HP5+ at 1600, but unfortunately it didn’t wind on correctly. These first images of a homeless man resting on the steps to St Martin in the Fields are actually from the second time I shot that scene – I realised the loading mistake by the time I’d reached Tottenham Court Road, and walked back to recapture what had originally been the first images on this roll. 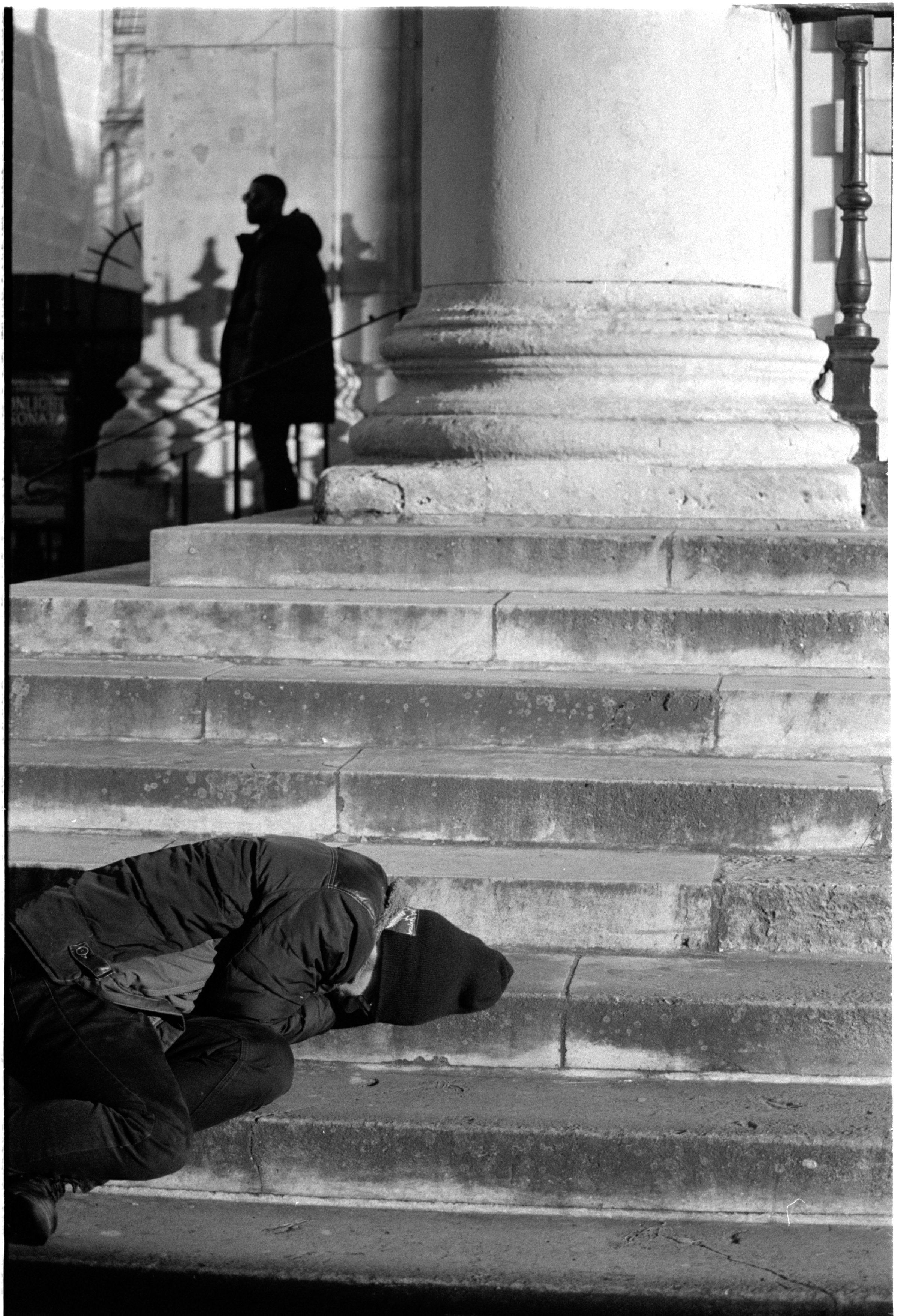 After this I continued to just meander through central London. It was a nice level of empty – enough subjects around, but no crowds to deal with. I called it a day around 4pm when the sun started to set. I’d completed two full rolls which made it a relatively productive day, but while I’d enjoyed the morning at the race I knew I would have to make up for it by shooting again in 2020, which I’m looking forward to.